With the exception of just a few projects, Falles Properties act as developer and as main contractor, in which we acquire the property and we project manage and oversee all aspects of the design, construction or conversion and the fit-out.

Completed in 2001, this project comprised 11no. two-bedroom semi-detached houses under the ‘affordable homes’ scheme. All eleven houses were sold to locally qualified first-time buyers. 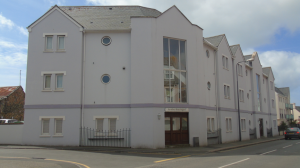 Having owned and occupied this site as a car park for many years, the company gained permission to construct 10no. one-bedroom apartments on the site and a local builder, Marett Construction, was awarded the building contract. Upon completion in 2002, the scheme was retained by the company for the local rental market.

This scheme comprising of 8no. four bedroom detached houses, all of which were marketed and sold to the local market in 2003. Here the company purchased this site, which housed one bungalow and project managed the construction of 3no. luxury bespoke four-bedroom houses, each commanding spectacular rural views to the south. We also marketed the scheme, selling all three houses within weeks of completion in 2005.

Here, the company acted as main contractor in project managing the full refurbishment of a coastal dwelling, on behalf of a private client. The full extent of the works included new Spanish roof slates, a complete silicone render plaster system applied to the exterior, new double-glazed windows installed, a redesigned interior to include new staircase, new kitchen, new bathrooms and new interior plastering to all rooms, together with new hard and soft landscaping outside. The client retained the property upon completion. 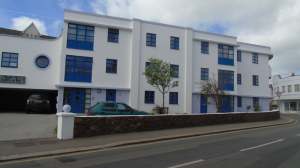 Here, the company purchased a run down retail site, which already had planning approval to demolish the dilapidated single storey shop units and to construct an apartment block scheme in an art-deco style comprising of 4no. one bedroom and 4no. two bedroom units. Upon completion in 2007, four units were sold and two units were retained by the company for the local rental market.

The company purchased this commercial property, which comprised obsolete vacant offices split within a 1960s office building at the front and a 1980s office building at the rear. A residential apartment scheme was drawn up to convert the rear building and to demolish and rebuild the front building to create 5no. one bedroom units and 2no. two bedroom apartment units, all benefiting from having their own private amenity space and a communal courtyard and roof terrace. The company acted as main contractor project managing the construction, fitting-out and the furnishing of all the units in 2010. All seven apartments are retained by the company for the unqualified local rental market.

Registered as a “Building of Local Interest”, with planning approval, this end-of-terrace five bedroom Georgian house was converted into 2 two-bedroom maisonettes with works completing in August 2011.  Each self-contained maisonette unit comprised two double bedrooms, a kitchen/diner and a large lounge leading out onto a 60 sq.ft long landscaped garden looking out to meadows beyond.

Here, the company acted as main contractor in project managing this residential scheme on behalf of a private client. On this prominent coastal site, the existing 1920s bungalow was demolished and an exclusive two storey apartment block containing just five bespoke units, in a modern art-deco style, was constructed, with the client taking occupation of the scheme’s only duplex and the remaining four units being retained by the client for the local rental market.

Here again, the company acted as main contractor in project managing this residential scheme on behalf of a private client. Following planning permission, the existing fire-damaged farmhouse complex was demolished and two new houses in a similar traditional style to the old farmhouse were constructed. The client retained both dwellings upon completion. 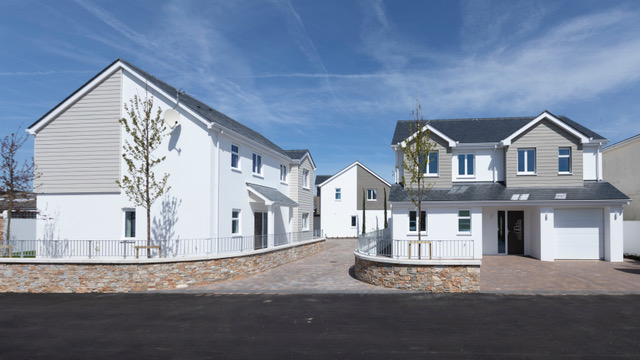 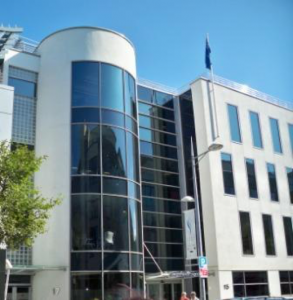 Owned by the company for many years, this commercial site located in a prominent position within the prime office business district in St. Helier, was occupied by Falles Hire Cars from where they operated their hire car fleet. With serious interest from prospective financial institutions, the company appointed a design team to prepare an office scheme to fully utilise the site’s potential. Subsequently planning approval was obtained for a prestigious landmark building comprising 33,000 sq.ft of category ‘A’ office space with underground parking for 26 cars. With a pre-let agreement signed with a blue chip financial institution, the company appointed AC Mauger Construction as the main contractor to oversee all aspects of the 14 month build and fit-out with the project being completed and the head tenant taking occupation in July 2006. This property has since been renamed Hawksford House.

The company purchased this corner town centre commercial property, which comprised un-modernised vacant offices over an existing jewellery shop. A specialist office architect, Elliot Design Partnership, was appointed to redesign the office proposition, creating modern open plan office space with raised floors, lift access, new double-glazed windows and air-conditioning throughout. A new retail unit was also created at street level. Once planning approval was obtained, the company acted as main contractor project managing the construction and the fit-out with works completing in late 2009, with a law training organisation taking a lease on all three office floors in July 2010 and a beauty salon taking a lease on the newly created retail unit. 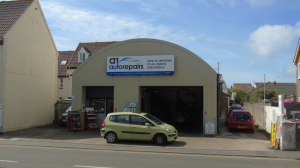 This was a very challenging project for the company, as it involved the re-wiring, re-plumbing re-cladding of an existing steel-cladded commercial building, which was leased and occupied by a vehicle workshop business. All the refurbishment and building works had to be carried out, with the minimum amount of disruption to the tenant. Not an easy task considering that the new insulated outer skin steel cladding could not be installed without first having to remove with difficulty all the old rusty steel cladding and reinforce and repair the existing structural steel frame. With planning approval obtained, all the interior-related works were undertaken including the electrical re-wiring, the plumbing and all drainage works and then a rain-proof scaffold erected enveloping the structure so that the re-cladding works could go ahead. Extra provision had to be made to ensure the site was made totally secure to prevent unauthorised access and to safeguard the tenant’s contents and equipment. All works were successfully completed on time in 2012 with the tenant now enjoying a much improved and more efficient premises from which to operate his garage business from. 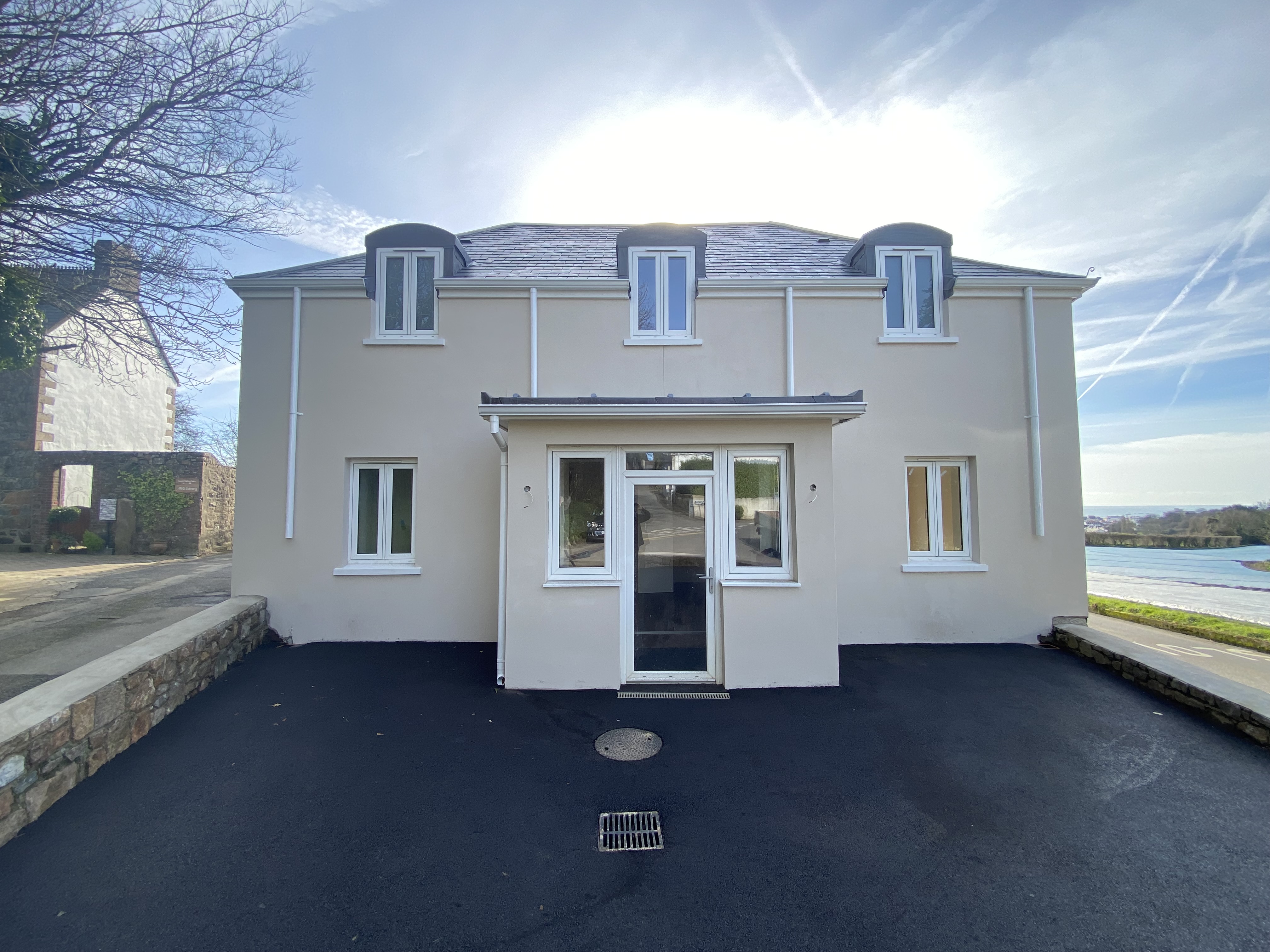